What is a toxin

Toxins are the  substances that are poisonous and harmful to the humans, sometimes leads to life threatening conditions. Most of the pathogenic diseases we are suffering from are due to the specialized toxins released from the pathogenic microbes. These toxins are highly specific to their organisms. Sometimes normal drug can also becomes toxin at higher doses. Our Immune system gets activated whenever an antigen enters the body. Hence when a toxin enters into humans it gets detected as an antigen by our immune cells like lymphocytes and B-lymphocytes produces antibodies. These antibodies reacts with the antigen i.e., toxin and inactivates or destroys it by Ag- Ab interactions like Precipitation or  Agglutination reaction .

The toxins which have biological origin are said to be bio-toxins. They may be either produced by the plants or animals and micro-organisms. These are produced for the defense mechanism in Ants, honey bee, termites etc., and also for predation in scorpion, snake etc., Some of the toxins produced by microbes are, 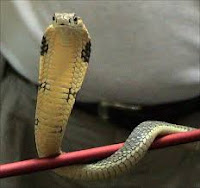 Toxins which are released out to the external surroundigs are called exotoxins. These are protein in nature with two major subunits A and B. Subunit-A is having immunogenecity i.e., having the ability to activate the immune system to produce Antibodies. Subunit-B is involved in binding the toxin to the host cell surface receptors. These are thermolabile i.e., heat sensitive, could resist at a temperature around 60-80०c. These can be inactivated by high temperatures, chemicals like formalin, iodine, Ketones etc., Mostly observed in gram +ve bacteria. Examples like Clostridium tetani causing tetanus and coryneybacterim diptheriae causing diptheriae.

Toxins does not released out instead these are attached onto the cellwall of bacteria. These are lipo-polysaccharides with fatty acids and sugars in the  cell wall. Highly potent immunogenecity compared to exotoxins. These can resists to a temperature of 250०c and are highly thermostable. These can be   inactivated by using oxidizing agents like superoxides, peroxides, hypochlorite etc., Mostly observed in gram-ve bacteria. Examples like Meningococcal infections and Septicaemia. 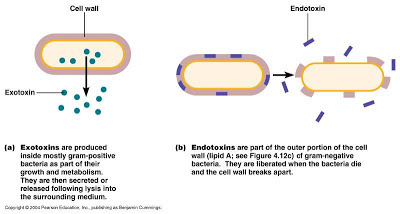