HISTORICAL NOTE AND TERMINOLOGY
Even though the term lupus was first used by  Rogerius in the13th century(Blotzer 1983), the systemic nature of the disease was established much later by Osler in 1904 (Smith and Cyr 1988).  A number of laboratory findings have revolutionized the understanding and diagnosis of the disease. The discoveries established lupus as an autoimmune disease. Since then, defects in immune complex clearance, B-cell tolerance, and T- cell function have been demonstrated (Sullivan 2000).
EPIDEMIOLOGY: Systemic lupus erythematosus is more commonly seen in women than in men. It may occcur at any age. However it appears most often in people between the age of 15- 44. The disease affects African siberians, Americans and Asians more than people from other races. Recent studies have suggested that the incidnce of SLE is increased the female to male ratios varies from 4.3 to 13.6. 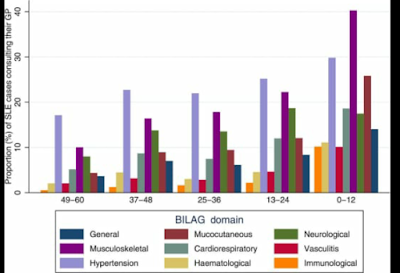 ETIOLOGY:
The causes of Systemic lupus erythematosus is not known, But Several factors has been associated with the disease.
Genetic: The disease isn’t linked to a certain gene but people with lupus often have family members with other autoimmune problems.
Environmental:  The environmental triggers can include ultraviolet rays, certain medications, viruses, physical or emotional stress, trauma.
Sex and hormone:  SLE affects women more than men. Womens may also experience more severe symptoms during pregnancy and with their menstrual periods. By this observations the female hormone estrogen  play a role in causing SLE.
Some medications: such as hydralazine, procainamide, quinidine, isoniazid, diltiazem, Target immune therapy minocycline.
SIGNS AND SYMPTOMS:
Symptoms may vary from person to person, and may come and go. Everyone with SLE has joint pain and swelling at some time or the other. Some develop arthritis. SLE often affects the joints of fingers, hands, wrists, and knees.
Other common symptoms include: chest pain when taking deep breath, fatigue, fever with no other cause, hair loss, weight loss, mouth sores, skin rash(butterfly rash), swollen lymph nodes.
Brain and Nervous system: Headaches, numbness, tingling, seizures, vision problems and personality changes.
Digestive tract: Abdominal pain, nausea, vomiting
Heart: valve problems, inflammation of heart, numbness.
Lung: buildup of fluid in pleural space, difficulty in breathing.
Skin: uneven skin color and fingers that change color when cold(Raynaud phenomenon).
Kidney: Swelling in legs. 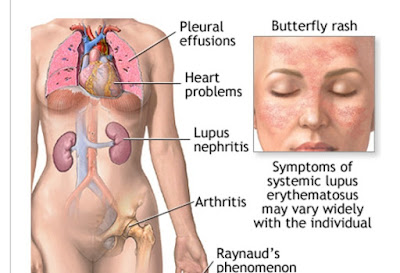 Diagnosis:
Physical examination include: sun sensitivity rashes, such as malar or butterfly rash, mucous membrane ulcers which may occur in mouth or nose, arthritis, hair loss, hair thinning, signs of cardiac or lung involvement such as murmurs, rubs, irregular heartbeats.
No one single test is diagnostic for Systemic lupus erythematosus but screenings that help doctors come to an informed diagnosis include: blood test such as
Pathophysiology:
Systemic lupus erythematosus is an autoimmune disorder characterized by multi system inflammation with the generation of auto antibodies. Although the specific cause of SLE is unknown, multiple factors are associated with the development of disease, including genetic or epigenetic, ethnic, immuno regulatory, hormonal and environmental factors. Both innate and acquired immunity, occur in Systemic lupus erythematosus. 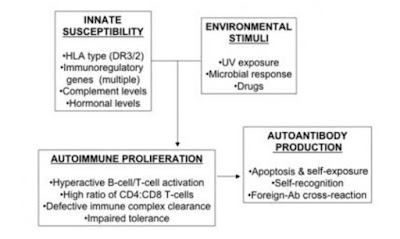 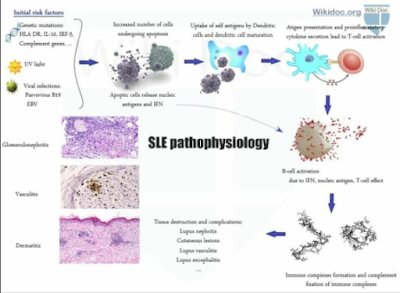 Treatment:
Management of SLE often depends on the individual patients disease severity and disease manifestations, although hydroxychloroquine has a central role for long term treatment in all SLE patients.
Pharmacotherapy:  Medications which are used to treat SLE manifestations include the following
*Anti- malarials : Hydroxychloroquine
*Corticosteroids: Methylprednisolone, prednisone- short term use recommended
*Non biological DMARDS: Cyclophosphamide, methotrexate, azathioprine, mycophenolate, cyclosporine
*NSAIDS: Ibuprofen, naproxen, diclofenac
*Biologic DMARDS: Belimumab, rituximab
Adjunctive therapy:
Vitamin-d insufficiency and deficiency are more common with patients of SLE than in the general population. Vitamin-d supplementation may decrease disease activity and improve fatigue. This supplementation may improve endothelial function, which may reduce cardio vascular disease.
No diet-based treatment of SLE was been proven effective. Patients having SLE should be reminded that activity may need to be modified as tolerated. Specifically, stress and physical illness may precipitate SLE flares. Additionally persons with SLE should wear sun screen and protective clothing or avoid sun exposure to limit photosensitive rash or disease flares.

•         Lupus foundation of America. What causes lupus? Available at