It is a condition in which a female carries an embyo or a foetus in her womb which is said to be uterus. Pregnancy occurs either by sexual intercourse or by in-vitro fertilisation during which a male sperm and a female ovum are fused under in-vitro conditions to develop an embyo in a surrogant mother’s womb.The pregnancy period also called gestational period, generally lasts about 28 weeks, nearly 9 months. Pregnancy can be identified by by positive results through urine test, and confirmed by blood test, ultrasound etc.,The positive result of pregnancy through urine is due to the presence of Human Chorionic Gonadotropin (HCG). It is a hormone produced by placenta after implantation (Attachment of embryo onto the wall of uterus). Sometimes in rare cases, the HCG levels also rises even when the patient is not pregnant and this might be due to the cancer as some of the cancerous tumor cells are also able to produce this hormone. 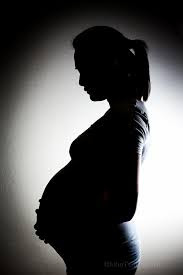 How does the pregnancy occurs

The Hypothalamus of brain stimulates pituitary hormones which secretes Follicle Stimulating and Leutinizing hormones. These in-turn stimulates the female reproductive organ ovary to synthesize and release ovum by a process called ovulation.Ovary secretes estrogen and progesterone which helps in thickening and maintaining of uterus endometrium. Thickening of uterus occurs by cell division and proliferation of endometrial(inner) lining of uterus, hence the tissues and blood vessels grows enormously to form thickened bed which favors the implantation of embryo.
The FSH stimulates the production of primary follicles in the ovary which slowly develops into secondary follicles and matures into Graffian follicles with ovum inside. On maturation the graffian follicles ruptures and releases ovum outside by Ovulation. After the release of ovum, the follicles degenerates into corpus-luteum which secretes progesterone. This hormones thickens endometrium of uterus  and maintains pregnancy. If fertilization does not occur, this corpus luteum degenerates by luteolysis to form a scar of connective tissue called Corpus albicans. 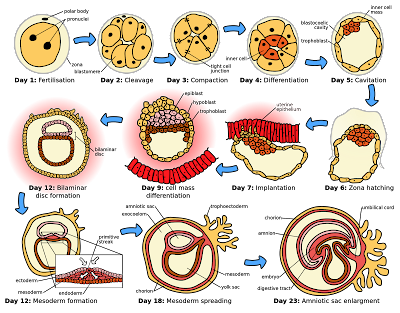 After ovulation, the released ovum enters the fallopian tube with the help of fimbriae for reaching the uterus. Meanwhile the sperm of male that has entered through vagina of female travels into the fallopian tube, where the sperm(n) fuses with the ovum(n)  forming a diploid zygote(2n). This zygote reaches the uterus and gets attached to the endometrial layer of uterus and this process is called Implantation. The zygote develops into Embryo, Morula and Blastocyst which later develops into fetus.

This stage lasts from 0-12 weeks and includes the First three months.

This stage lasts from 13 -28 weeks and includes the Fourth to sixth month. 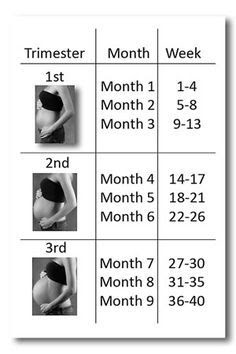 This stage lasts from 29 – 40 weeks and includes the seventh to Nineth month. 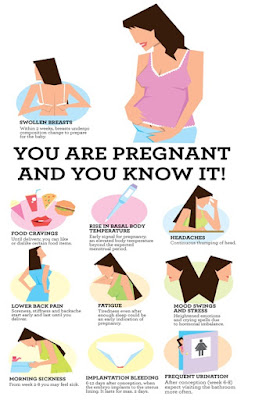 Precautions to be taken during pregnancy

Here are a few precautions to be followed during pregnancy.
It is very important to take care during pregnancy. One should not neglect the health complications of mother. Proper nutrition rich diet with protein and fiber rich food has to be taken. Regular health check up has to be followed  by consulting physician. Maintain healthy and stress free environment to help for the growth of healthy baby.