Antibiotics are the most powerful medicines and a boon to the society, used in the treatment of many bacterial infections. But recent days their use have been increased enormously to an extent that resistance have been developed against Antibiotics.

Bacterial resistance develops due to to the following reasons.

1. Resistant bacteria produce an enzyme ,Beta-Lactamase, which inhibits the action of Beta lactam inhibitors.
2. By mutations, Bacteria were able to alter the confirmation of some proteins ,Penicillin Binding protein and other ribosomal protection proteins,so that the antibiotics, cannot be able to inhibit protein synthesis.
3. Some bacteria modifies their metabolic pathway to produce resistance against drugs such as sulfonamides which inhibits folate metabolism and prevents nucleic acid synthesis. 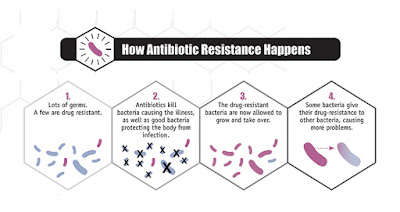 The bacteria which has resistance will easily get transmitted from one to other living organisms and divides rapidly spreading the infections. 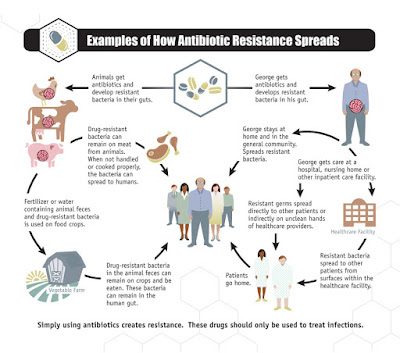 Let us know a few points on how these antibiotics act by different types of mechanisms. 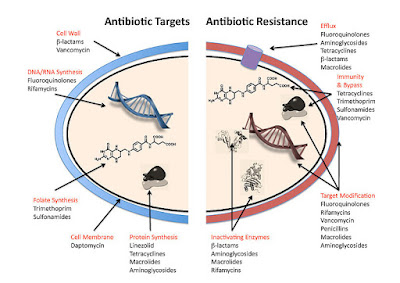 Act by Inhibiting Cell wall synthesis in Bacteria.They bind to pencillin binding proteins and inhibits the cross linkage of NAM( N-Acetyl glucosamine) and NAG(N-Acetyl muramic acid) ,which are the key components in synthesis of cell wall of bacteria.Bacterial cell  cannot survive in the absence of cellwall. Resistant bacteria alters PBP and prevents the binding of antibiotic at the Active site of cell wall enzymes of bacteria.Beta lactam Antibiotics are  Pencillins, Cephalosporins,Monobactams and Carbapenams.

Act by Inhibiting Protein  synthesis in Bacteriai.The 50 s and 30 s subunits of ribosomesare the binding sites for these antibiotics.Two imporatant sites A-site (Acceptor-site) and P-Site (Peptidyl site) will be targeted to inhibit bacterial protein synthesis. 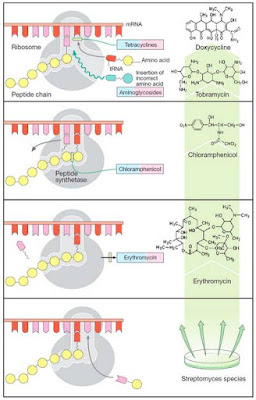 Act by Inhibiting Nucleic Acid (DNA) synthesis in Bacteria by bloking an enzyme called DNA gyrase which is mainly involved in introducing negative supercoils in its DNA.Urinary Antisceptics – Quinolones and Flouroquinolones.

Thus, Antibiotics though play a vital role in protecting mankind against different bacterial infections, their usage must be limited as the bacteria were able to produce resistance against these antibiotics upon repeated and regular medication.Stay healthy and ofcourse the best medicine for any problem is your smile.so be happy always.
If any suggestions regarding this topic please notify through your comments.Thank you.See u soon.